Early onset Alzheimer disease (EOAD) is a form of AD that manifests before the age of 65 years. Heritability of this rare form is 91% to 100% [1]. AD-causing mutations have been identified in the amyloid precursor protein (APP), presenilin 1 (PSEN1) and presenilin 2 (PSEN2) genes, but it less clear to what extent these genes contribute to EOAD [2]. With likely less than 10% of incident EOAD cases related to these genes, about 90% of EOAD cases remain unexplained [1-3].

Several lines of evidence have suggested a link between increased risk of late-onset AD (LOAD). This study aimed to study the role of circulating cholesterol in relation to EOAD. EOAD is associated with the apolipoprotein E ε4 allele (APOE E4), which is known to raise circulating cholesterol levels, mostly LDL-c [4, 5]. Elevated midlife cholesterol levels have been found in relation to higher risk of AD and cognitive decline, in epidemiological studies, even after adjusting for APOE E4 [6-12]. Cholesterol-lowering therapy has been associated with a lower AD risk, independently of APOE E4 [13].

EOAD was defined as probable of definite AD based on the National Institute of Neurological and Communicative Diseases and Stroke–Alzheimer’s Disease and Related Disorders Association Work Group criteria [17], with symptoms starting at or before the age of 65 (mean age: 55.6, SD: 4.3). Controls were cognitively normal individuals of 60 years and older (mean age: 72.0, SD: 9.6). 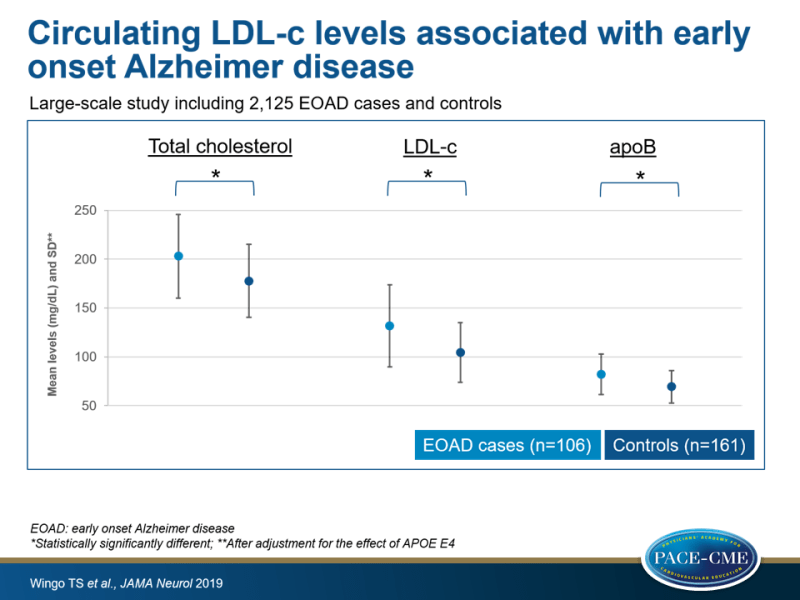 This study found that about 3.4% of all patients with EOAD carry a known AD-causing variant, but only rare coding variants in PSEN1 were associated with EOAD. The strong association between APOE E4 and EOAD was confirmed in this data set. Moreover, a robust association was found between elevated LDL-c levels and EOAD, which was independent of APOE E4. Rare genetic coding variants of APOB were more abundant in EOAD patients than in controls, but this could not fully explain the association between higher LDL-c levels and EOAD, which suggests that additional genes and/or mechanisms are involved.

In an editorial comment, Makato Ishii [18] note that EOAD patients are often excluded from AD studies, due to the low prevalence of the condition. Because the estimated heritability of EOAD is considerably higher than that of LOAD, and because identified mutations thus far only account for about 11% of EOAD cases, it is likely that there are more AD-susceptibility genes to be discovered. The current study by Wingo et al. confirm that the four tested AD-susceptibility genes account for only a minority of the strong genetic predisposition seen in EOAD.

The study provides the first evidence that rare genetic coding variants of APOB are strongly associated with EOAD, but the data also suggested that there probably are additional contributing factors independent of APOB and APOE. Candidates may include rare variants of other genes involved directly in LDL-c metabolism or factors known to modulate circulating LDL-c levels. Additional studies are needed to further elucidate the association between LDL-c and EOAD. As the authors noted, it is unknown whether protective variants of APOB exist. Identifying such a variant would strengthen the link between APOB and AD pathogenesis. Links between other CV risk factors and EOAD may also be studied and found to be equally enlightening.

Ishii notes that it is a strength of the study that all participants were included in the 29 US Alzheimer's Disease Research Centers (ADRCs), which have standardized research and diagnosis protocols. Nevertheless, some limitations have to be considered, such as that the diagnosis of AD was made by clinical criteria, without use of neuroimaging or cerebrospinal fluid AD biomarkers, allowing for misclassification of EOAD cases that were in fact non-AD dementias. Also, the study population was limited to white people, because of an insufficient number of samples from other ethnic groups. Moreover, factors that influence plasma cholesterol levels, such as dietary intake, drug therapy and hormones, were not taken into account.

Further studies like the one by Wingo et al. should be conducted, not only to identify additional candidate genes involved in AD, but also to discern any differences between EOAD and LOAD that may eventually lead to better management and care of patients with EOAD.

Download the slide Find this article online at JAMA Neurol.