This study investigated the relationship between BMI and pharmacokinetic, pharmacodynamic and clinical outcomes in patients enrolled in the ENGAGE AF-TIMI 48 trial [8,9]. This was a randomized trial that evaluated two dose regimens of the factor Xa remmer edoxaban (higher dose [HDE]: 60 mg once daily, and lower dose [LDE]: 30 mg once daily) compared with warfarin (INR 2.0-3.0). Edoxaban doses were halved in case of estimated creatinine clearance of ≤50 mL per minute, body weight of ≤60 kg, or the concomitant use of verapamil, quinidine, or dronedarone. Only HDE results are presented, as this is the only edoxaban dose that has been approved for clinical use. Median follow-up in the ENGAGE AF-TIMI 48 trial was 2.8 years. 21,105 Patients who had AF documented in the year preceding randomization with CHADS2 score ≥2 were included. The primary efficacy endpoint was the composite of adjudicated stroke or systemic embolic events (SEE) (ITT analysis) and the principal safety outcome was adjudicated ISTH major bleeding in the safety population while on treatment. 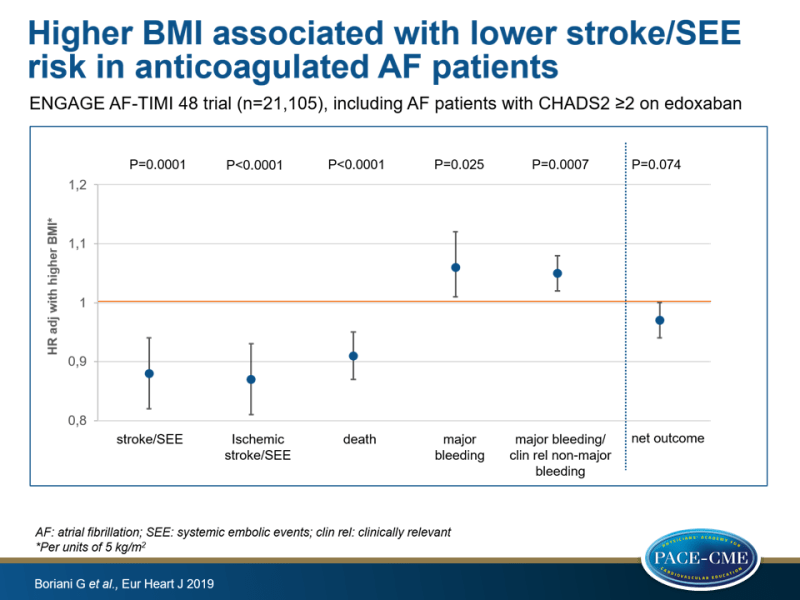 This analysis of ENGAGE AF-TIMI 48 trial data in patients with AF shows that over 40% of the population were obese. Higher BMI was independently associated with lower adjusted risks of stroke/SEE and of death and with higher risk of bleeding. Net clinical outcome was comparable between higher and normal BMI categories. Sex differences were noted, such that in men, the risk of stroke/SEE declined with higher BMI, but not in women, and in women only, an increasing trend in risk of bleeding was seen with BMI.

7. Mak KH, Bhatt DL, Shao M, et al. The influence of body mass index on mortality and bleeding among patients with or at high-risk of atherothrombotic disease. Eur Heart J 2009;30:857–865.