Effect of Systolic and Diastolic Blood Pressure on Cardiovascular Outcomes

Focus has been on systolic hypertension after the Framingham Heart Study and other studies demonstrated that systolic hypertension is more important as a predictor of CV outcomes [1]. This was reflected in the 2000 clinical advisory statement from the National High Blood Pressure Education Program [2] and the American College of Cardiology (ACC)–American Heart Association (AHA) risk estimation tool [3] does not include diastolic blood pressure (DBP) for determination of CV risk. In contrast to this, clinicians still record and target values for both systolic BP (SBP) and DBP.

This study examined whether SBP and DBP were independently associated with the risk of adverse CV outcomes. In addition, the effect of the threshold for the definition of hypertension on the association between SBP and DBP with outcomes was assessed, and a possible J-curve relationship between DBP and outcomes was explored.

A retrospective cohort study was conducted analyzing data from outpatients from Kaiser Permanente Northern California (KPNC), a large integrated health care system [11]. During a 2-year baseline period, initial BP measurements and coexisting conditions were recorded and over an 8-year observation period, additional BP measurements were performed and occurence of MI, ischemic stroke or hemorrhagic stroke was documented. A total of 1.3 million study participants were enrolled, who were ≥18 years and had one BP measurement at baseline (Jan 2007-Dec 2008) and ≥2 BP-measurements during the observation period (Jan 2009-Dec 2016). BP was measured using an automated oscillometric BP cuff. 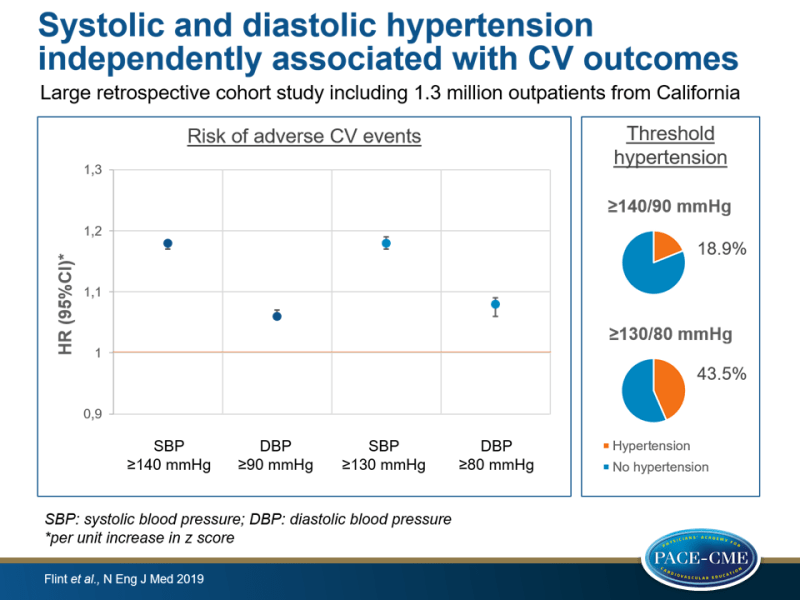 This large retrospective cohort study including people from Northern California demonstrated that both systolic and diastolic hypertension were associated with increased risk for adverse CV outcomes. The association was similar when using threshold defining hypertension as ≥140/90 mmHg or ≥130/80 mmHg. A J-curve relationship between DBP and outcomes was seen, with higher risk in those with lowest and highest DBP values. The higher risk of outcomes in those with lower DBP could partially be explained by age, other covariates and by a greater effect of systolic hypertension.