THEMIS: Ticagrelor Added to Aspirin in Patients with Stable Coronary Disease and Diabetes

THEMIS-PCI: Ticagrelor Added to Aspirin in Patients with Diabetes and Stable Coronary Artery Disease with a History of Prior Percutaneous Coronary Intervention

Patients with stable coronary artery disease (CAD) and type 2 diabetes (T2DM) are at increased risk of CV events. The P2Y12 inhibitor ticagrelor, in addition to aspirin, has demonstrated to give benefit in patients with acute coronary syndrome (ACS) and in those with previous myocardial infarction (MI). It is unknown whether CAD patients with T2DM without prior MI or stroke benefit from ticagrelor in combination with aspirin.

THEMIS is a randomized, double-blind, placebo-controlled trial enrolling 19220 T2DM patients ≥50 years with stable CAD (history of PCI, CAD or angiographic stenosis ≥50% in at least 1 coronary artery). Patients were randomized in a 1:1 ratio to receive ticagrelor or placebo, in addition to aspirin. Initially dosing of ticagrelor was 90 mg bid, then 60 mg bid due to insights from the PEGASUS-TIMI 54 trial.

Primary outcome was a composite of CV death, MI and stroke.

A prespecified analysis of THEMIS patients with a history of PCI (and previously treated with DAPT) was undertaken with the hypothesis that this group would have a favorable balance of efficacy and safety.

Results for the overall study population

Results for the PCI population

Treatment with ticagrelor, in addition to aspirin, in patients with CAD and T2DM resulted in a reduction of the composite endpoint of CV death, MI and stroke. This benefit, however, was at the expense of an increased risk for major bleeding. In those with previous PCI, ticagrelor treatment resulted in a favorable net clinical benefit.

The combination of long-term ticagrelor and aspirin may be beneficial in selected patients at high risk of ischemic events and low risk of bleeding.

In response to a question which other high risk population could benefit from this DAPT therapy, Steg answered that this is likely in those who had a stent, because their bleeding risk is lower and these patients had previously received DAPT therapy.

Recommendations for ticagrelor plus aspirin in patients with CAD and T2DM include patients with a history of PCI and those with a low bleeding risk, according to Bhatt.

Watch our video about the THEMIS trial 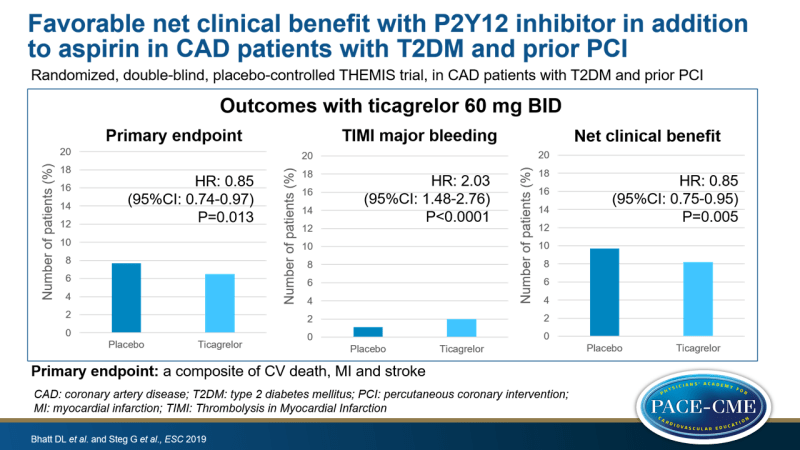