Up to 64 million people worldwide have heart failure (HF), and the prevalence is rising with the aging population. There is only approved evidence-based treatment for patients with reduced ejection fraction (HFrEF, EF≤40%). Patients with HF with preserved EF (HFpEF) are hospitalized at nearly the same rate as those with lower EF. Thus, this condition represents a large unmet need.

The PARAGON-HF study was a randomized, double-blind, active comparator study that tested the hypothesis that sacubitril/valsartan, compared to valsartan alone, would reduce the composite outcome of total HF hospitalizations and CV death. After an active run-in period in which patients of at least 50 years of age and LVEF ≥45% were exposed to valsartan 80 mg BID and subsequently to sacubitril/valsartan 49/51 mg BID, patients were randomized to sacubitril/valsartan 97/103 mg BID or valsartan 160 mg BID, on top of optimal background medications for comorbidities (excluding ACEi and ARB). Patients had signs and symptoms of HF (NYHA II-IV), structural heart disease confirmed on echo, and mild elevation in natriuretic peptides. They were not actively decompensated and had not other reasons for symptoms. The primary endpoint was the composite of total (first and recurrent) HF hospitalizations and CV death.

The overall population of HFpEF patients showed a non-significant 13% reduction with sacubitril/valsartan treatment in the primary endpoint. Several supportive analyses and secondary endpoints, including how patients feel and kidney function, are suggestive of benefit with sacubitril/valsartan when compared with valsartan. The treatment effect, however, was heterogeneous, as a greater benefit was seen in patients with EF below normal, but not in the range normally considered reduced. Moreover, women showed greater benefit than men. These two groups showed an absolute risk reduction similar to that seen in patients with EF < 40%.

Safety and tolerability data were not shown during the press conference, but it was said that they were similar to in PARADIGM-HF, with more hypotension, but less elevation in serum creatinine and potassium with sacubitril/valsartan compared with valsartan.

These findings suggest that some patients with HFpEF, for whom no evidence-based therapy is available, may benefit from treatment with sacubitril/valsartan, particularly those with EF below normal but not truly reduced.

During the press conference, dr. Solomon was asked whether he would use sacubitril/valsartan in the borderline group with EF below normal. He answered that the data show that these patients benefit, with a quite high absolute and relative benefit. Hence, in this group there is a rationale to use this agent. John McMurray, who was on the press conference panel, agreed. He said that he is normally very careful about interpretation of subgroup analyses. But it is not the first time they have seen that a drug that works in HFrEF, also works in those with low-normal EF. These people have mild systolic dysfunction. Experience from other trials suggests that may they have something to gain from probably all of these agents. We should remember that 40% is an artificial cut-off point: nothing changes biologically between EF of 39% and 40%. The difference between the effect in men and women was not discussed.

Several members on the panel considered this an important advance in the field, as the unmet need in patients with HFpEF is great. It was also mentioned that the cut-off point of 0.05 for statistical significance is artificial, which is the reason why more often people move to other types of analyses. 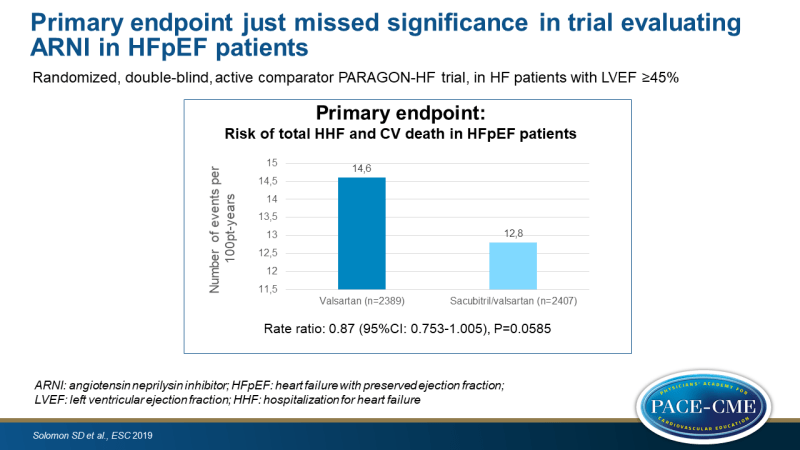