Presented at the ESC congress 2019 in Paris, France by: Satoshi Yasuda (Suita, Japan)

After one year following revascularization in patients with stable CAD and AF or in patients not requiring intervention, guidelines recommend oral anticoagulant monotherapy. Evidence, however, from randomized controlled trials is lacking. In addition, in contrast to guideline recommendations, a high number of patients remain on combination therapy after one year.

The trial was stopped early because of a higher risk of death from any cause in the combination therapy group. Median follow-up was two years.

In the discussion, it was asked whether type of antiplatelet agent might influence the outcome of bleeding. Yasuda said that 70% of patients were on aspirin and remaining on the P2Y12 inhibitor clopidogrel. The data have not been stratified for type of antiplatelet agent, and he could therefore not answer this question. In answer to the question on how high the risk of this population was, he gave the following median scores: CHADS₂: 2 CHA₂DS₂-VASc: 4 en HAS-BLED: 2.

In response to the question about generalizability and dosage, it was noted that the 50 mg dose used in Japan has similar effects as 20 mg used in whites.

Ruschitzka, one of the chairpersons of this session, said that this concept of monotherapy with a NOAC is a game changer in this field. 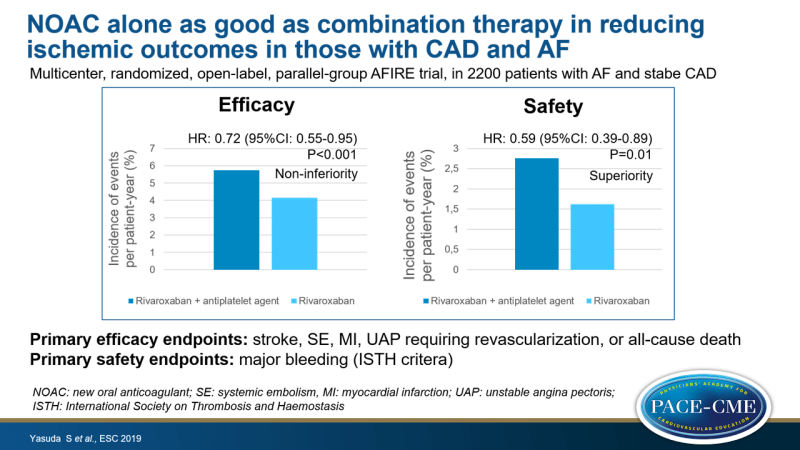