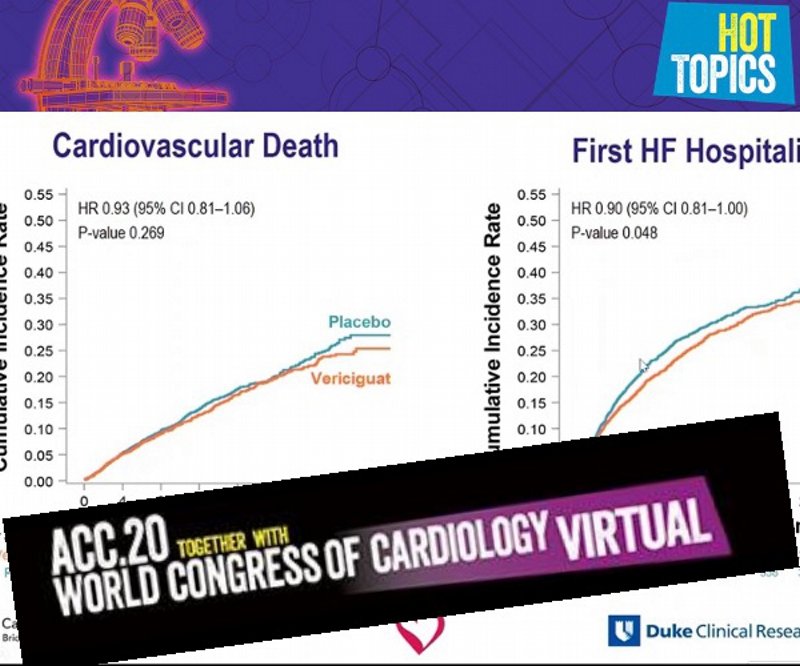 Patient with chronic heart failure (HF) who experience a worsening HF event have a high risk of death or HF hospitalization despite guideline-based therapy. Although therapies exist for management of HF symptoms, HFrEF patients with worsening conditions have limited options. Oxidative stress and endothelial dysfunction in HF patients lead to decreased levels of nitric oxide (NO) and decreased soluble guanylate cyclase (sGC) activity, which may result in myocardial and vascular dysfunction.

The VICTORIA (Vericiguat Global Study In Subjects With Heart Failure With Reduced Ejection Fraction) trial examined whether use of vericiguat reduced the primary end point, a composite of CV mortality and first HF hospitalization, in HF patients with reduced ejection fraction (HFrEF) after a recent worsening HF event. In addition, safety of treatment with vericiguat was assessed. Inclusion criteria included hospitalization within last 6 months or therapy with IV diuretics within last 3 months. 5050 Patients were randomized to vericiguat or placebo on top of guideline-based therapy. Median follow-up was 10.8 months.

In this trial, high risk HFrEF patients with worsening HF were enrolled for whom there is an unmet need not addressed in prior HF studies. Therapy with sGC stimulator vericiguat reduced the primary endpoint of CV death and first HF hospitalization in these patients when compared to placebo. A new therapeutic target by enhancing cGMP production has been demonstrated in this trial.

Armstrong showed that the KM curves started separating after 3 months and persisted throughout the study. Subgroup analysis is under investigation and Armstrong said there are indications for difference in effectiveness of vericiguat when dividing patients based on NT-proBNP (those with the highest NT-proBNP show no benefit with vericiguat). But he also added that drawing conclusions from subgroup analysis is tempting, but can be dangerous.

ACC president Richard Kovacs (Indianapolis, IN, USA) briefly discussed this study. He noted that BP monitoring is important with this drug. And he raised questions about cost-effectiveness and a low rate of inclusion of blacks, in particular black women, in this trial.

A question was asked about how to compare this drug to other novel HF drugs. Armstrong responded that simultaneously with the publication of this trial, a paper on the topic of comparing novel HF drugs is published in Circulation. He emphasized though that the VICTORIA trial was done in a particular HF population, those with worsening HF. In response to a question which percentage of HFrEF patients would be eligible for this drug, he estimated that this would be 1 in 4.