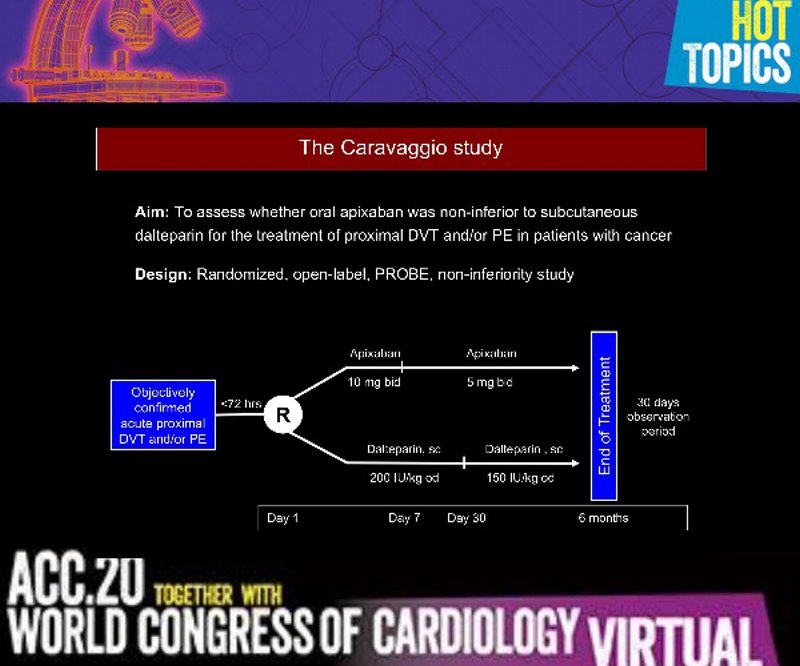 Apixaban For The Treatment Of Venous Thromboembolism Associated With Cancer: The Caravaggio Study

Cancer patients with venous thromboembolism (VTE) have a risk of recurrent VTE. Therefore, studies on use of anticoagulant therapy is needed. Major guidelines recommend low-molecular-weight heparin and recently edoxaban and rivaroxaban have been added. However, risk of bleeding in increased with these agents and therefore clinical benefit has been questioned.

The Caravaggio study examined whether apixaban was non-inferior to dalteparin for prevention of proximal DVT and/or PE in patients with cancer. This was a randomized, open-label, PROBE, non-inferiority trial in which cancer patients with objectively confirmed acute proximal DVT or PE were randomized to apixaban (n=576) or dalteparin (n=579) and followed for 6 months. Primary efficacy outcome was objectively confirmed recurrent proximal DVT or PE. In addition, safety was assessed as major bleeding according to EMA definition.

Apixaban was non-inferior to dalteparin in reducing cancer-associated VTE events and no difference in bleeding, including GI bleeding, was observed between the two treatment groups.

The discussant Sahil Parikh, MD (New York, NY, USA) noted that most previous studies showed a greater bleeding risk with a NOAC, but in the Caravaggio trial no increased bleeding risk was seen. This adds another bullet in the gun, he said. He then wondered which NOAC to use. But this is difficult as we have no data on comparisons of NOACs. As drug-drug interactions play a role in cancer patients, we now have an alternative therapy for this patients.

The CARAVAGGIO results were published simultaneously in NEJM