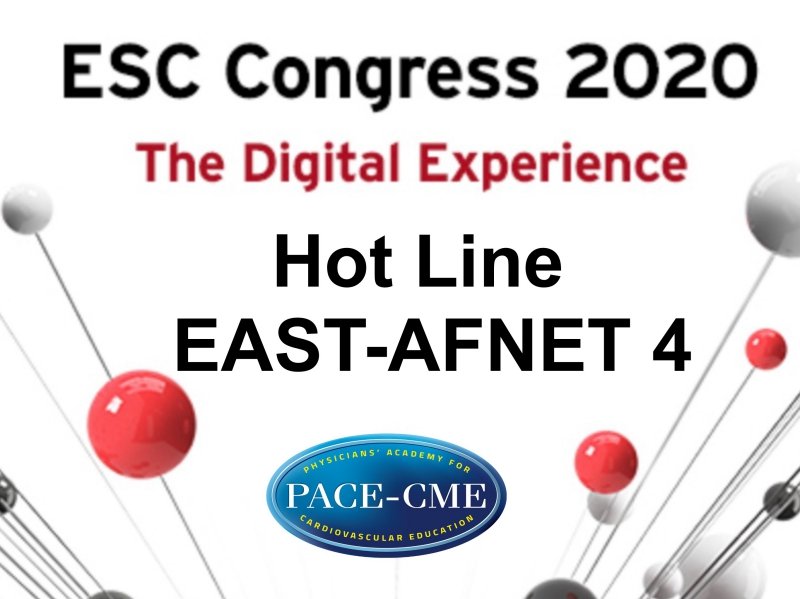 In the last years a lot of progress has been made in the management of patients with AF, the most common arrhythmia. Anticoagulation prevents most ischemic strokes and rate control renders many patients asymptomatic. Nonetheless, 5% of patients with AF suffer from CV death, stroke or hospitalization with acute HF or acute coronary syndrome.

EAST-AFNET 4 was a multicenter, investigator-initiated trial. A total of 2789 patients in the first year of AF diagnosis and at least two CV condition were enrolled in the trial between 2011 and 2016. Patients were randomized to early rhythm control or usual care (1:1). Both groups received anticoagulation, and treatment for CV conditions and rate control according to current guidelines. The early rhythm group (n=1,395) received antiarrhythmic drugs or catheter ablation (19.4% after 2 years) and the usual care group (n=1,394) were managed with rate control. Median follow-up was 5.1 years. First primary outcome was a composite of CV death, stroke, or hospitalization for HF or acute coronary syndrome. Second primary outcome was total nights spend in hospital.

In response to a question why early rhythm therapy outperformed usual care, Kirchhof answered that an intervention at an early stage reduces the risk for CV complications. When a patient stays longer in atrial fibrillation, the atria will be damaged, which makes it more difficult to return to a normal sinus rhythm.

The results were simultaneously published in the N Engl J Med Watch a video by prof. Kirchhof