How Should We Sequence the Treatments for Heart Failure and a Reduced Ejection Fraction? A Redefinition of Evidence-Based Medicine

In a commentary article, John McMurray and Milton Packer proposed a new algorithm to achieve treatment with all four foundational treatments for HFrEF within 4 weeks. The proposed algorithm involves three steps and can be initiated in a patient in whom diuretics have achieved clinical euvolemia.

The algorithm can be individualized to specific circumstances and is most appropriate for outpatients. Caution is required in hospitalized patients with decompensated HF. This approach achieves treatment with beta-blocker, SGLT2i, ARNI and MRA within 4 weeks. Up-titration to target doses should be pursued after this period.

The conventional approach for treatment of HFrEF is to start with ACEi or ARB, to be followed by a beta-blocker, then an MRA, then an ARNI and then a SGLT2i. It is recommended to first reach the target dose of each drug class before adding the next recommended drug class. McMurray and Packer proposed the new algorithm because the conventional approach to achieving treatment with all four drug classes suffers from several limitations. First, The order to the prescribe the drugs is the precise sequence in which they were tested in clinical trials. The assumption that the most effective treatments were developed first, is not a strong rational for making therapeutic recommendations. Second, the conventional approach assumes that foundational treatments are effective only when titrated to target doses. However, benefits to reduce morbidity and mortality can already be reached at low doses. Target doses are often only modestly more effective in comparison with starting doses in reducing risk of CV death [1]. Third, the conventional approach assumes that clinical trials tested the efficacy and safety of each drug class in presence of all background therapies at target doses. The truth is that most patients in these trials were receiving sub-target doses of recommended treatment. Moreover, a substantial proportion of patients in most recently completed trials was not treated with an MRA or ARNI.

McMurray and Packer state that if physicians prioritize the achievement of target doses of each drug class before starting treatment with other drug classes, it takes several months to prescribe all recommended treatments. This delay is unacceptable since each of the drug classes has been shown to reduce morbidity and mortality within 30 days. The proposed new algorithm increases the likelihood that highly effective therapies are initiated within a month. McMurray and Packer expect that this will prevent HF death and HF hospitalizations and will enhance the tolerability of concurrently or subsequently administered treatments.

Download the slide Find this commentary article online at Circulation 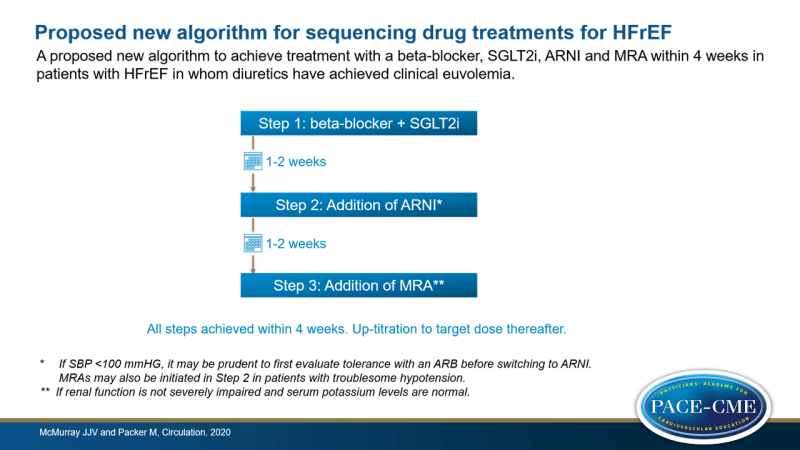