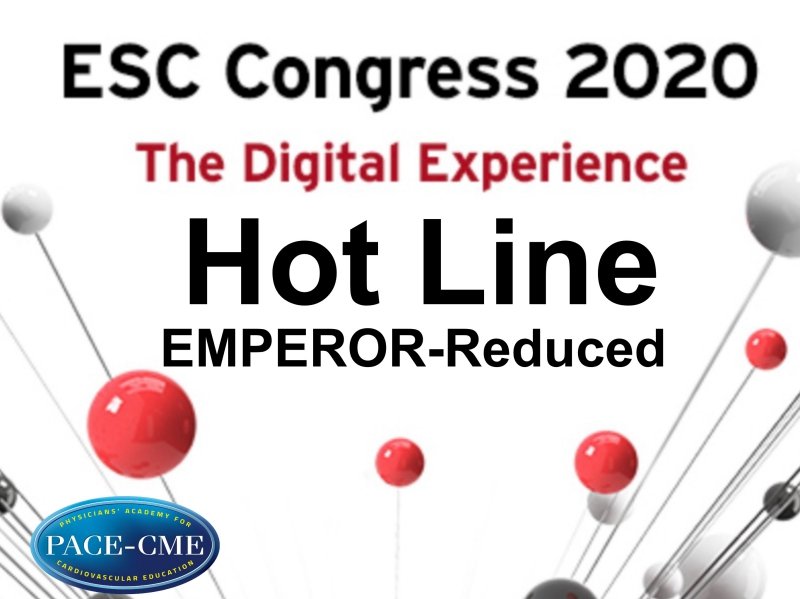 The Empagliflozin Outcome Trial in Patients with Chronic Heart Failure and a Reduced Ejection Fraction (EMPEROR-Reduced) evaluated the effects of the SGLT2i empagliflozin in patients with HFrEF (LVEF ≤40%), with or without diabetes, who were already receiving appropriate treatments for HF. The study population was enriched for HF patients who were at increased risk for a serious HF event. EMPEROR-Reduced was a double-blind, placebo-controlled randomized trial that was conducted in 565 centers in 20 countries. A total of 3730 patients were randomized in a 1:1 ratio to receive either empagliflozin 10 mg once daily or placebo in addition to their usual therapy for HF.

The EMPEROR-Reduced trial showed that empagliflozin reduced the combined risk of CV death or hospitalization for HF by 25% in HFrEF patients with or without diabetes, compared with placebo. This difference was primarily related to a risk reduction of 31% for first HF hospitalization. Empagliflozin also reduced the risk for adverse renal outcomes and slowed the rate of decline in estimated GFR during double-blind treatment, compared with placebo.

Discussant Marco Metra, MD compared the results of the EMPEROR-Reduced trial with the results from DAPA-HF that were presented last year. The current trial investigated the effects of empagliflozin on CV and renal outcomes in patients with HFrEF, whereas DAPA-HF investigated the effects of dapagliflozin. When looking at baseline characteristics, patients in EMPEROR-Reduced had more severe HF as shown by lower LVEF and higher NT proBNP levels compared with those in DAPA-HF. Patients in EMPEROR-Reduced also had lower eGFR at baseline as compared with patients in DAPA-HF. In DAPA-HF, a relatively low event rate with respect to renal dysfunction was reported and no significant reduction in the main renal endpoint was found between the dapagliflozin group and the placebo group. On the other hand, EMPEROR-Reduced trial showed a 50% risk reduction on the composite renal endpoint and slower rate of decline in estimated GFR in the empagliflozin group compared with the placebo group. More patients were treated with ARNI in the EMPEROR-Reduced trial as compared with the DAPA-HF trial. Because of the small number of events, DAPA-HF showed no difference between subgroups of patients that were treated with or without sabubitril/valsartan on the primary outcome. EMPEROR-Reduced showed a larger risk reduction for the primary outcome with empagliflozin vs placebo in patients on sacubitril/valsartan compared to those not on sacubitril/valsartan. Another difference between the two trials was CV death alone was significantly reduced in DAPA-HF, but not in EMPEROR-Reduced. Metra proposed three possible explanations for this finding. A first possible reason could be that there are differences between the two SGLT2i. However, no heterogeneity was found in other outcomes. A second possible explanation could be related to the enrichment of the study population with HF patients who were at increased risk for a serious HF event in EMPEROR-Reduced. It could be that the drugs are less effective in advanced HF. A final possible explanation could be that this is a chance finding. A head-to-head comparison between both drugs will be necessary to investigate this. Metra ended his discussion by referring to a recently published cross-trial analysis which used data from EMPHASIS-HF, PARADIGM-HF and DAPA-HF to estimate the aggregate benefits of comprehensive disease-modifying pharmacological therapy (ARNI, beta blocker (BB), MRA and SGLT2i) vs. conventional therapy (ACEi or ARB and BB) in HFrEF patients. This analysis showed an HR of 0.38 for the imputed treatment effects of ARNI+BB+MRA+SGLT2i vs. ACEi/ARB+BB on the primary composite endpoint of CV death or first hospital admission for HF. Physicians should keep this message message in mind in every day clinical practice, according to Metra.